I Had a Baby Who Was Too Tired to Sleep. He Just Cried All the Time

"It came to a point when my husband suggested that my milk supply was too low."
by Sasha Lim Uy Mar 3, 2018 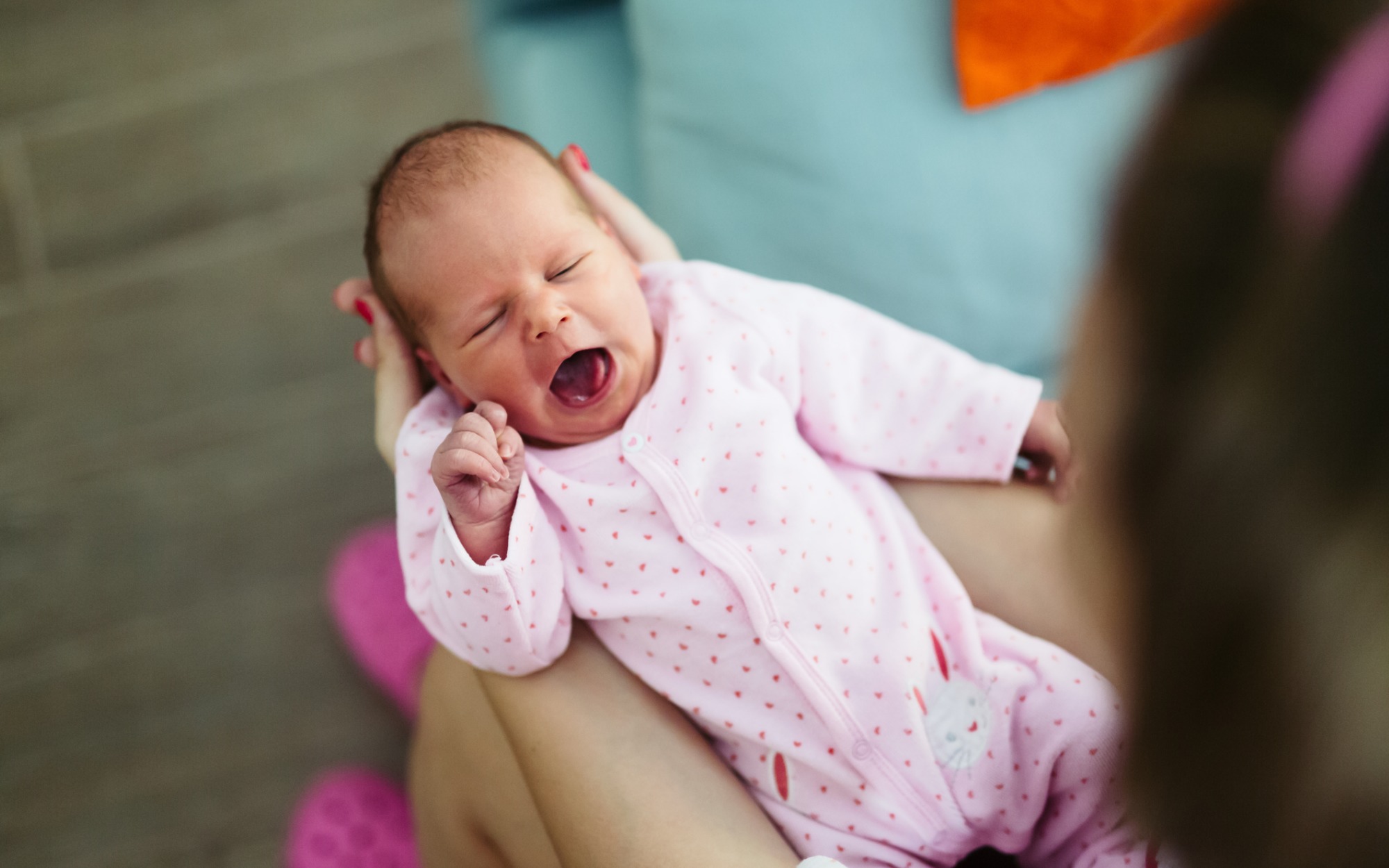 People talk about colic and kabag. But overtiredness in babies is the vicious cycle that takes its toll on babies and their parents and caregivers.

This is the first part of this new mom's diary on her first month with her newborn baby. Read how she finally coped with her overtired baby here.

I lived in perpetual darkness for the first few weeks of my son’s life. It was supposed to be one of the brightest chapters of our lives, but instead, my baby and I were holed up in a bedroom with the curtains drawn, mobile phones turned over, and the lights switched off. The only way we could see was through the dull yellow of a lamp, which was shaded by an old towel, like a glimmering symbol of hope.

I thought my son was textbook. He was born at exactly 40 weeks. He latched right away, and he fed and slept like clockwork. He was active when he was awake and serene when he rested. I soon bragged to my other mom friends about how easy my baby was.

Then, the three-week growth spurt hit. A few days of hungry cries and voracious feeds, it was as if someone flipped a switch, and my "easy" baby just stopped napping. As a first-time mother whose experience with child-rearing was limited to a few play sessions with my nephews, I didn’t think much of it. Maybe he just wasn’t tired. I chose to delay the bottle as much as possible, so I took him everywhere — to a lunch date, to a party, to a dinner. He would cry out, but my breast would quickly appease him. Then he’d sleep in the evening — the way we all did.

Nothing I Did Worked, So I Hired a Sleep Coach for My Baby

After a few days without naps, I was starting to worry. Babies this young were supposed to feed and sleep and sleep. My 4-week-old just hung on to my breast. I read somewhere that newborns were wired to learn and whatever new stimulus they took in during their waking hours would be absorbed during sleep. Mine was awake and crying when he wasn’t eating.

I pored through the Internet for answers. It wasn’t so much for advice initially; I needed to validate my concern, figure out if this was normal or a phase, and that I wasn’t alone. He was gaining weight, so people told me not to worry. Technically, he was sleeping, albeit more or less seven hours of broken slumber.

But I knew something was wrong. My baby was always agitated and restless. He looked sleepy, but he refused to cross over to dreamland, and the smallest change in the environment made him wide-eyed and alert. Friends and relatives told me that perhaps it was just his personality not to sleep. I would’ve quickly agreed if he was happy awake, but his persistent crying convinced me that something wasn’t right.

As a millennial mom, I diagnosed him myself: It was an extended growth spurt, then he had colic and then silent reflux.

It came to a point when my husband suggested that my milk supply was too low, which was contrary to what my pump was telling me. After half an hour of direct breastfeeding, we gave him an extra three ounces of expressed breast milk to see if it would calm him down. He hastily took his first bottle, but he resumed his frantic crying after finishing its contents. It was later that evening when I dimmed the lights and bounced him, did he finally calm down.

After one week of tortured crying, I came across an article on overtiredness in babies. According to Baby Care Advice, “overtiredness means your body has gone beyond being ready to sleep…despite being physically fatigued your mind is alert…keyed up or agitated.”

There was a checklist of signs and, well, it might as well be written for my baby. He was fighting sleep; he slept little during the day, and he was often inconsolable. He would sleep soundly at night only because he was too exhausted to do anything else.

There was even one detail the article mentioned how overtired babies would take one day to crash and sleep, letting their parents think that everything was right again — until the next day when you come in confident, and the crying starts and doesn’t end.

Our previous activities took a toll on my baby who had no choice but to submit to whatever decisions I made for him. I was upset with myself, but since I became sure of the problem, I thought I could quickly remedy it.

But I learned the problem with overtiredness in babies is it’s like riding a bicycle over a mountain. Once they’re past being tired, they refuse to sleep, making things worse. And it’s been two weeks since we went past that point.

I read everything I could about putting an overtired baby to sleep, and while there were helpful articles, I couldn’t find anything on battling two weeks’ worth of lost slumber, but I had to try.

We started by cutting out anything that might stimulate him. He would be drowsy for a second until he’d discover the overhead light and stare at it for an hour, losing any progress. We started turning off anything bright, walking on tiptoes, and humming soft lullabies. Eventually, we began barring people from our room, not only because of the added stimulation. I could no longer let others relish him for his cuteness when behind closed doors, I was at my wit’s end trying to get him to close his eyes.

The yaya and I would take shifts because I also needed to pump, take a shower, and eat. I swallowed up every sleep technique that was allowable for a newborn. A sling didn’t work, and his rocker that he used to love failed us. Even latching him to sleep ended up with mixed results.

We were rocking and swaying and bouncing. Despite the efforts, the only thing that would fall asleep were our arms and legs.

We found minor success in Dr. Harvey Karp’s 5S program: Swaddling (that we stopped doing since we got home from the hospital), shushing, swinging, and soothing (he used me as a pacifier because he would get even more stressed with the plastic ones). While the 5S program resulted in his first long nap, it was still an arduous task. It took me two hours of bouncing him in my arms for him to reach a point of drowsiness.

Setting a routine, which wasn’t recommended for a baby this young, was a near impossible task because it would take hours just to calm him down enough to relax.

I consulted with sleep coaches who couldn’t train a weeks-old newborn to sleep, but they were generous with their advice. Two of them told me that my priority should be to get him to sleep. One of them said, “Your baby is only one month young, you need to understand that he is still busy making important connections and his body is very busy indeed at many many things. These many things only happen during sleep, and he needs sleep like we need water right now.”

Another reiterated the above and even said that we had to force him to sleep, even if we needed to rock him the whole time. They assured me the bad sleep habits could be fixed later, but the lack of sleep could lead to bigger problems.

It was taking a huge toll on me. I would feel confident if we got in two naps during the day, only to find that confidence falling apart the next day when he’d just be impossible. Apart from the physical efforts of putting him to sleep, I was riddled with all the self-doubts of any first-time mom.

Read the second part of this story here.

Sasha Lim Uy eats to live and lives to eat. For five years, she handled SPOT.ph's food section and edited the last two installments of its Top 10 Food books. She is a curator for Madrid Fusion Manila and currently works as managing editor for Esquire Philippines.

'Sleep Training Was Like Giving Birth All Over Again'

Your Baby's Gear Guide for Good Sleep: What Is Truly Essential

From Newborn to Preschooler, 6 Expert Strategies for Sleep Success 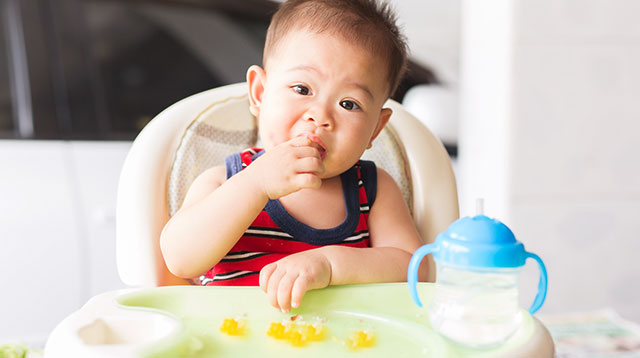 Read Next
Traditional Weaning or Baby Led? This May Help You Make the Decision
Read more stories about 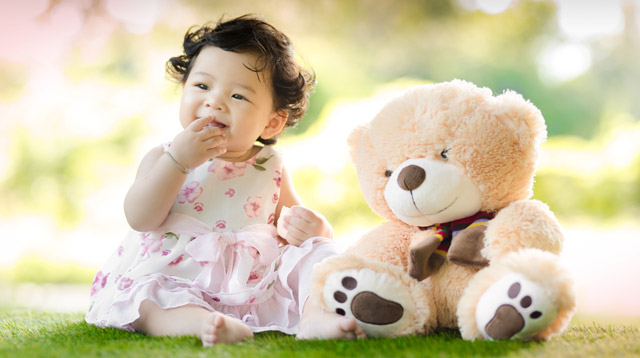 These 85 Korean Girl Names Reflect Positive Traits You'd Want Your Child to Have Many of the names are centered around positive traits and the beauty of nature.
Share Read More